Stephanie Barnes Wore the Kim Kardashian Dress Out in Public!

Remember the boob-tastic dress Kim Kardashian wore last week? How could we forget. Curvy redhead Stephanie Barnes decided to use scissors to re-create it and hit the streets of London to see if a normal woman doing normal things could pull off the look!

Considering Barnes is quite curvy with a 32F bust, she caused quite a stir among locals and tourists.

“I have natural 32F boobs and love Kim’s fashion sense but normally I’d NEVER go out with them displayed like this. It’s the equivalent of going out in a tiny bikini. There’s absolutely no support so something as simple as walking down the street was tricky. I was scared to laugh, cough or get the hiccups for fear of a nip-slip and running for a bus was an absolute no-no too.”

“When I started going about my daily business people just stared, but I kept telling myself ‘they’re just boobs’ and that I’m entitled to wear what I want. It was only 12 degrees so I got cold quickly too, and that left even less to the imagination! First, I headed to the supermarket to grab some fruit and nearly everyone did a double take at my melons as I picked apples.”

“It was embarrassing – why Kim would put herself in this position in the first place baffles me. The reaction I got from women was much the same – stares, gasps, double takes – but they knew it was the ‘Kim Kardashian’ dress and said, ‘Wow, you look amazing,’ which made me feel a bit more comfortable.” Source 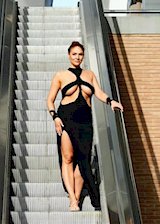 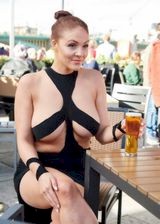 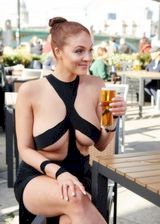 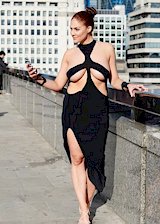 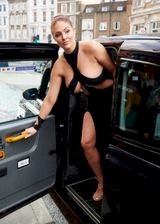 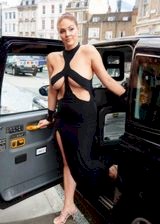 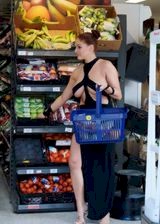 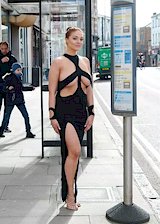 8 comments on “Stephanie Barnes Wore the Kim Kardashian Dress Out in Public!”